"We want you to be a well-known agent:" TTAND kicks off 2018 conference

This year, The Travel Agent Next Door’s conference is all about not being a secret agent.

But what exactly does that mean? As Flemming Friisdahl, founder of TTAND points out, it’s all about spreading awareness in order to make the most out of your personal business.

TTAND opened the conference yesterday morning here in Punta Cana, Dominican Republic. Approximately 140 travel agents and 24 suppliers have gathered at the Majestic Colonial Punta Cana from April 13 through April 20, in order to provide a series of updates for agents. “Consumers and the end person should be thinking of you, because at the end of the day, we don’t want you to be a secret agent, we want you to be a well-known agent,” Friisdahl explained. “If you’re happy, everybody wins, and from there, it’s really a domino effect.”

Alongside supplier updates, the morning included a tutorial on the most recent version of the company’s extranet system. Also in attendance was Robin Mednick, founder of Pencils For Kids, which is the official charity partner of TTAND this year. To date, TTAND has helped raise more than $18,000 towards this charity, which helps men, women, and children in Niger gain access to the supplies and materials necessary for a complete and fulfilling education.

Over the course of the week, travel agents have the opportunity to network and engage with suppliers through one-on-one training sessions and seminars, in order to learn more about unique product offerings, while also internalizing key takeaway points that translate to stronger sales.

Echoing Friisdahl’s earlier statement about the importance of the travel agent was Nicole Bursey, commercial director for Transat Tours. “We’re very interested in having strategic partnerships that develop into a win-win situation,” Bursey explained to the audience. “Flemming came to us with a very interesting proposal regarding supporting preferred partners. This is important because it’s not just about the money; it gives us the chance to focus our efforts on providing you with the proper support, and it lets us build great relationships with each and every one of you.” Bursey also emphasized that although Transat is known for its all-inclusive South vacation packages, travel agents should not be hesitant to sell the company’s European packages either, which are currently selling just as well as the South product offerings.

“We’ve increased the amount of flights to europe in the winter time,” Kooiman said. “We have direct flights from Montreal, Calgary and Vancouver and we’ve built a very strong connector program that feeds into Montreal and Toronto, providing more access to Transat destinations.”

Catching up with Crystal Cruises

The main message behind the presentation delivered by John O’Neil, strategic business development manager for Crystal Cruises was that selling luxury river cruises isn’t as difficult as it sounds. In fact, there’s a growing demographic of travellers who are guaranteed to book luxury product, so long as the option is on the table.

“Luxury purchases are on the rise because people want luxury and in the next 10 years, $980B is going to be inherited by Boomers (according to CLIA) and those people are looking for luxury options,” O’Neil explained. “They want quality experiences; they’re willing to spend the money and put it out there, but they want you to tell them about it.”

According to O’Neil, one of the biggest misconceptions travellers and travel agents alike have about the luxury cruise market is that it’s expensive, and it’s exactly that mentality which costs agents the chance at earning huge commissions. O’Neil advises against offering a “more affordable” option, simply out of hesitation over fear of losing a sale altogether. Instead, he suggests starting with the highest package available. That way, it’s up to the traveller to consider different packages that meet their budget, and the agent doesn’t low-ball their product.

“If I could tell you to stop doing one thing, it would be this: stop telling your clients that ‘This is the cost, but I can get it cheaper for you’,” O’Neil said. “You shouldn’t have to do that. You never know how much someone is willing to spend, be it for an anniversary celebration or other occasion, but if you put it in their heads that they can get all of this [luxury] at a cheaper cost, there’s no saying what you could have sold. Let them come to their own conclusions on what’s doable, and what isn’t, because they’ll tell you what works and what doesn’t.” According to O’Neil, the average spend on board a regular cruise is $1,400, and that doesn’t include gourmet dining options, off-shore excursions, or onboard experiences. On the other hand, luxury cruising takes care of all of that, and guests are completely taken care of.

Over the years, luxury cruising has changed significantly, because the demographic itself has changed. According to Crystal, every travel agent has a luxury client database - the trick is knowing how to uncover it.

“To market to affluent travel groups, you need to take a good look at your existing client list, and then really get to know them,” O’Neil explained. “These kinds of travellers don’t respond to emails. They want a real connection, and that means that in order to initiate a sale, you need to talk to them. Attracting luxury clients is all about thinking about who you want to move from a premium travel experience into the luxury sphere. Anybody today can be a luxury client, but you need to start thinking that way.”

Philip Solomon, general manager, Tourcan Vacations, took to the stage to share what was new with Tourcan Vacations, a Canadian-owned and operated tour company specializing in tours, safaris, and pre- and post-cruise arrangements in very specific destinations which include Africa, Asia, the Indian subcontinent, the Middle East and Turkey, the South Pacific, and South and Central America. The following updates were shared with agents:

Following an exciting first day of conference, the group took a bus over to the Now Onyx Punta Cana Resort and Spa for a special site inspection and masquerade-themed dinner, hosted by Air Canada Vacations and AMResorts-Breathless.

Stay tuned for Part 2 of our TTAND coverage this week in sunny Punta Cana, Dominican Republic! 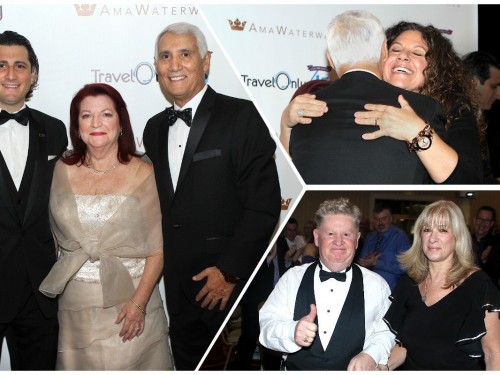