It all started with a t-shirt.

A popularity war between Canada’s business development managers for Playa Hotels & Resorts has gone viral on social media, fueling fascination, and fire, from all corners of the travel industry.

The idea was simple: coach agents to sell Playa’s portfolio of all-inclusive resorts in Mexico and the Caribbean and the top-sellers would be eligible to win a funky t-shirt custom-made by Marsh himself.

The brightly-coloured tees Marsh designed beamed with unbridled fabulosity, each boasting carefree catchphrases, such as “feeling fabulous,” “out of office” and “lemon drop,” topped with cheery, travel-inspired graphics, such as martini glasses, smiley faces, balls of sunshine, airplanes, cameras and palm trees.

But there was something peculiar about Marsh’s t-shirt collection. One of the four tees was noticeably different from the rest: a cherry-red top with the ambiguous words “amanda who?” written across the chest. 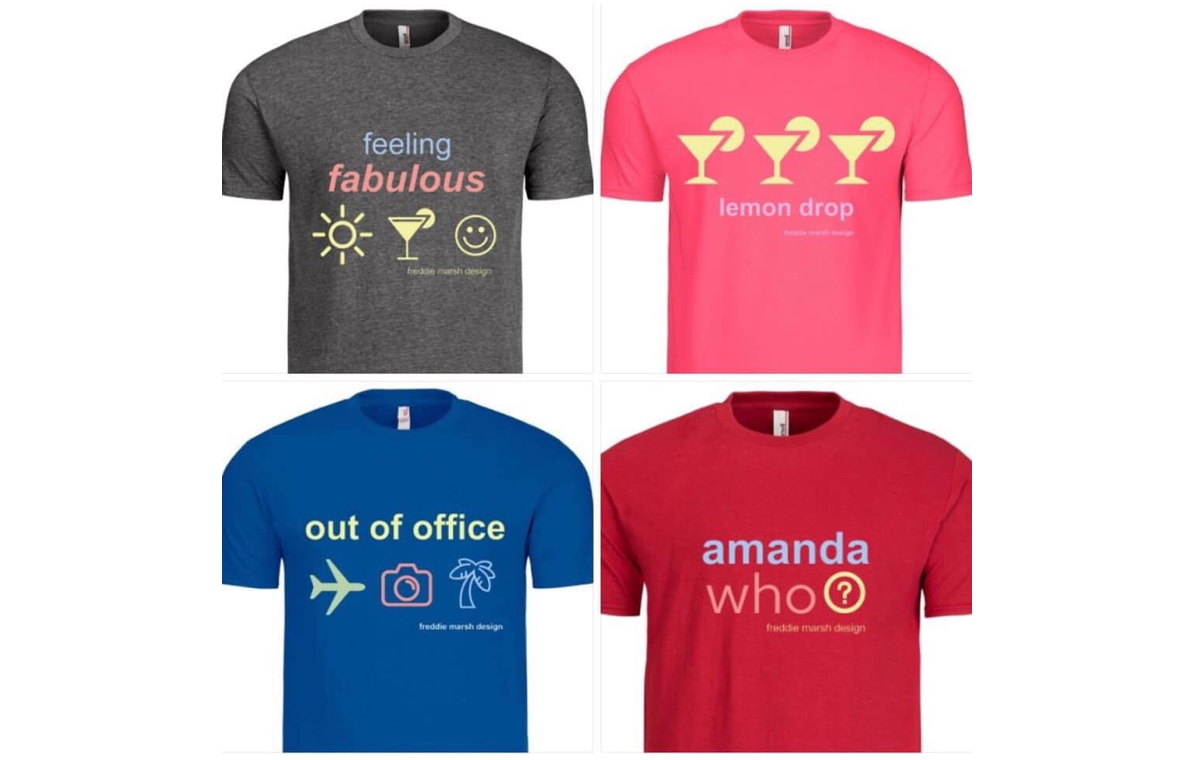 Amanda who?, you ask?

As travel agents across Canada can attest, the rivalry between Playa’s Freddie Marsh and Amanda Morris is a tale as old as time.

The two BDMs have been in fierce competition with one another for years – an east vs. west showdown, if you will, over who's territory could produce the highest sales (this, of course, dating back to when Morris’ BDM footprint extended from Ontario to Quebec to the Maritimes).

For the most part, the heated exchange between the dueling BDMs has been internal, save for the occasional smack talk on Facebook.

But when Marsh and his band of travel agents in the west started posting pictures of themselves wearing his “amanda who?” t-shirt on Facebook, tensions between the territories began to boil.

Not one to succumb to trolling, Morris retaliated and designed a t-shirt of her own: a dark blue top that read “freddie. my 3rd favourite playa bdm," accented by three decals of the Canadian flag.

She struck back with fire and fury, first mailing her t-shirt to Marsh’s own home in New Westminster, BC (in a gift-wrapped box, no less) and then mailing one to Marsh’s dear mother in Kamloops. 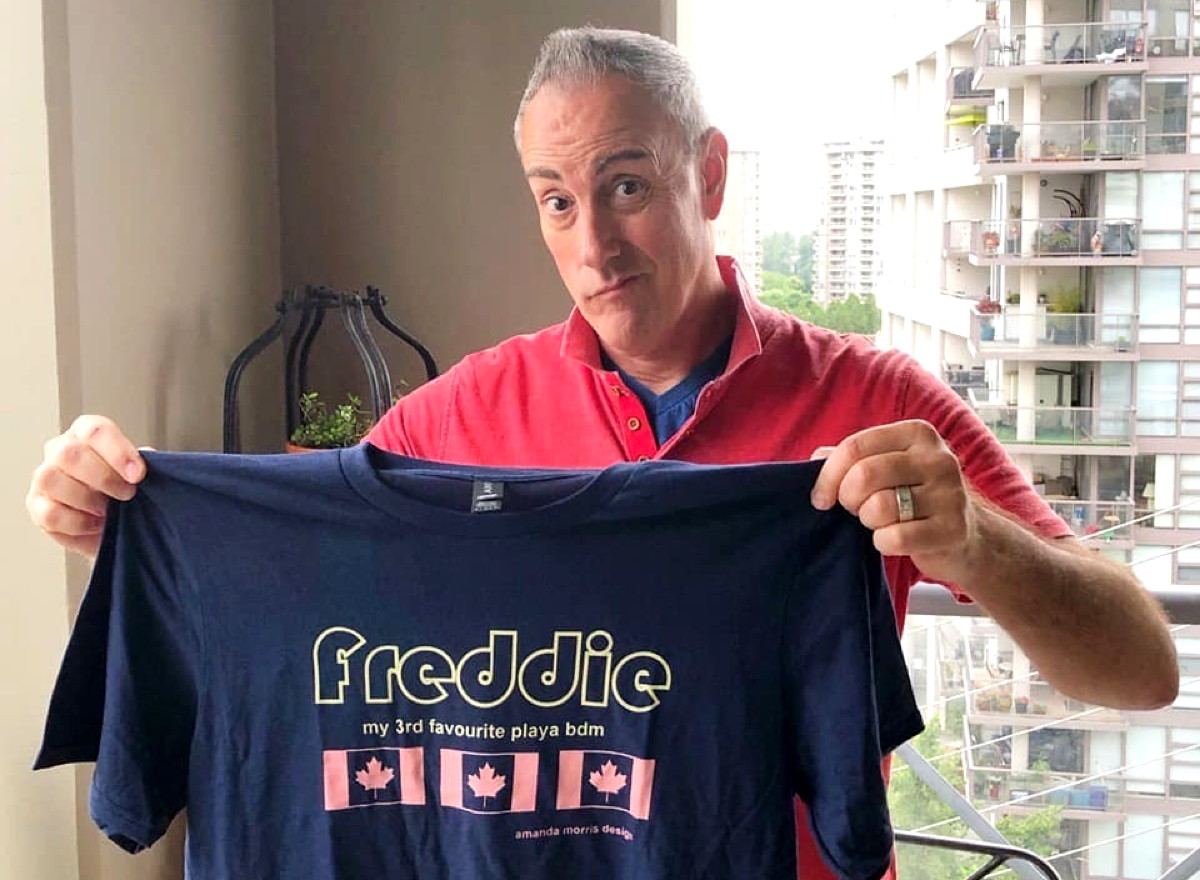 “Who does that?” Marsh tells PAX, speaking to media for the first time about the feud. “I guess I hit a nerve.”

But it didn’t end there.

Morris took things further and mailed her reimagined t-shirt to other non-competing BDMs and travel pros in the West, hitting Marsh where it hurts, close to home. 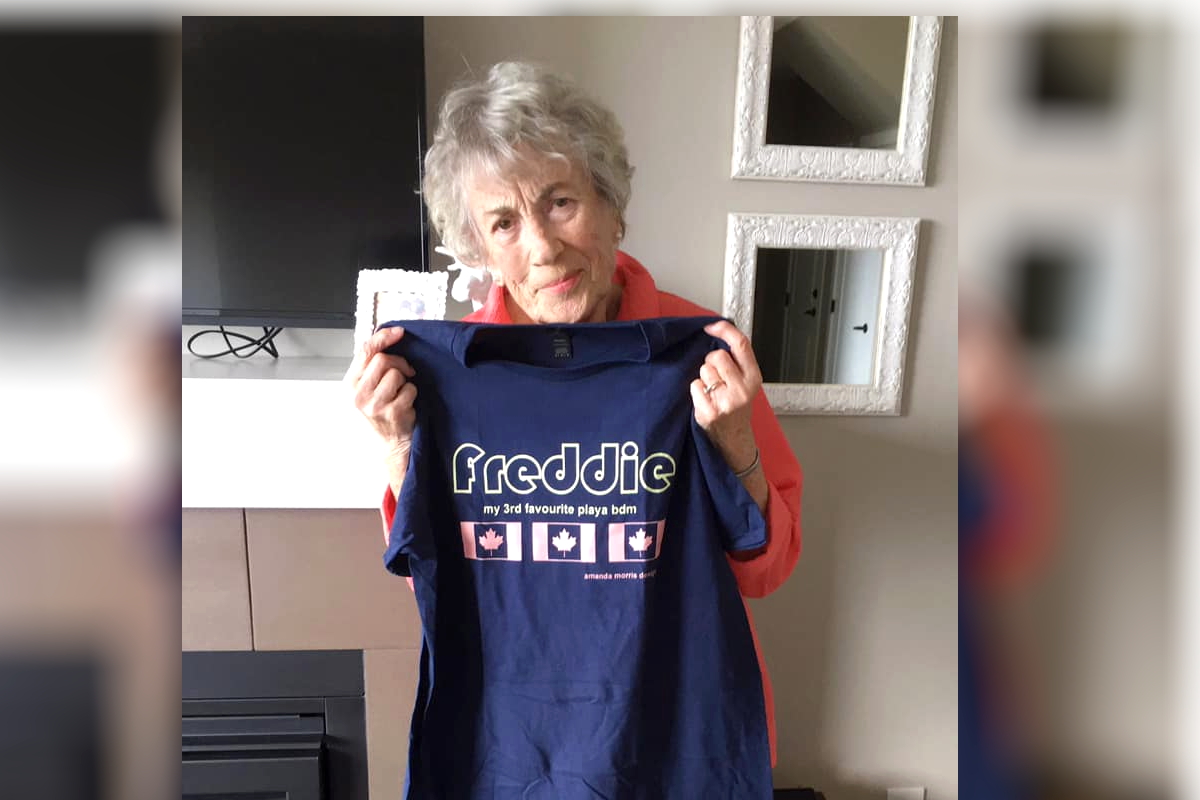 Naturally, Marsh retaliated and began mailing his “amanda who?” shirts to Morris’ contacts and colleagues in Ontario and the East.

What transpired was (and still is) one of the summer’s most fun and fascinating social media phenomenons to capture the attention, hearts, and algorithms of Canada’s travel trade. 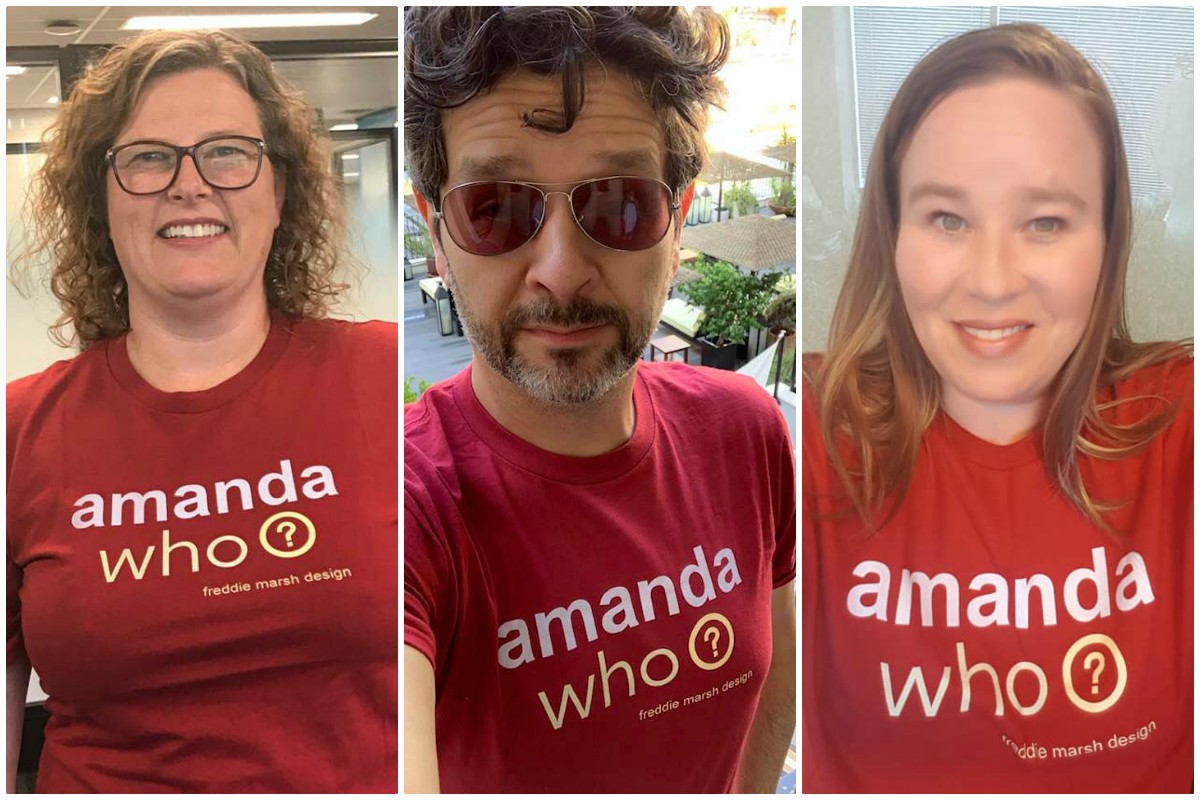 Since the maildrops began, recipients of the t-shirts – everyone from travel agents to sales directors to tour operators to air and cruise reps – have been posting pictures of themselves on Facebook, Instagram and beyond, wearing the gifted tops, and proudly proclaiming if they are on Team Freddie or Team Amanda.

If the online banter wasn’t enough, sightings of the trolling tees have reportedly reached countries far beyond Canadian soil, proving that a good prank knows no borders.

Lines in the sand have been drawn. And Canada’s travel industry is eating it up.

All kidding aside, the trending meme that is Freddie and Amanda’s t-shirts – a digital game of Spy vs. Spy, if you will – is a master class in social media and how to use it well.

And don’t let the outrageous details of this tale confuse you. Marsh and Morris, truthfully, are very good friends.

“We’re like brother and sister,” Marsh tells PAX in a conference call with Morris also on the line. “We’re constantly fighting for attention and doing silly things to poke fun at each other. The agency community knows we’re super close.”

The viral t-shirt battle was born out of a genuine desire to connect with Canada’s travel trade in a creative and unconventional way, Marsh explains.

“We wanted to engage with agents in a fun and playful way outside of the everyday sales calls,” Marsh tells PAX. “With so many people working from home now, we saw Facebook and Instagram as the best way to reach as many people as possible.” 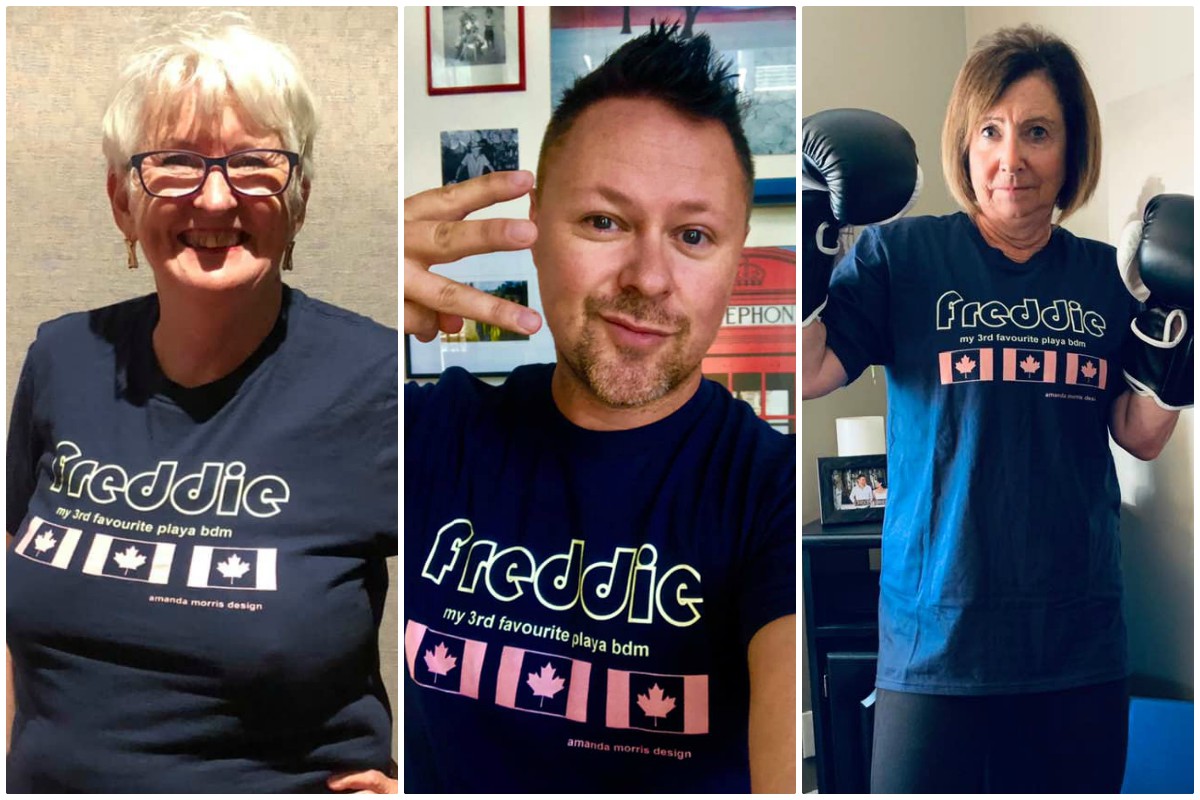 They also wanted something that would help them stay relevant during the summer, which is typically a quieter period for bookings.

“It’s keeping us front of mind,” Morris tells PAX. “They’re not your typical posts about our hotels and promotions or any of our direct sales tactics. It’s about being present in the agency and travel community, and being fun, friendly and approachable.”

Their efforts have paid off: for anyone who’s Facebook friends with anyone in Canadian travel, it isn't unusual these days to wake up to a new “amanda who?” or “freddie. my 3rd favourite playa bdm” image gracing the top of your social media feed. 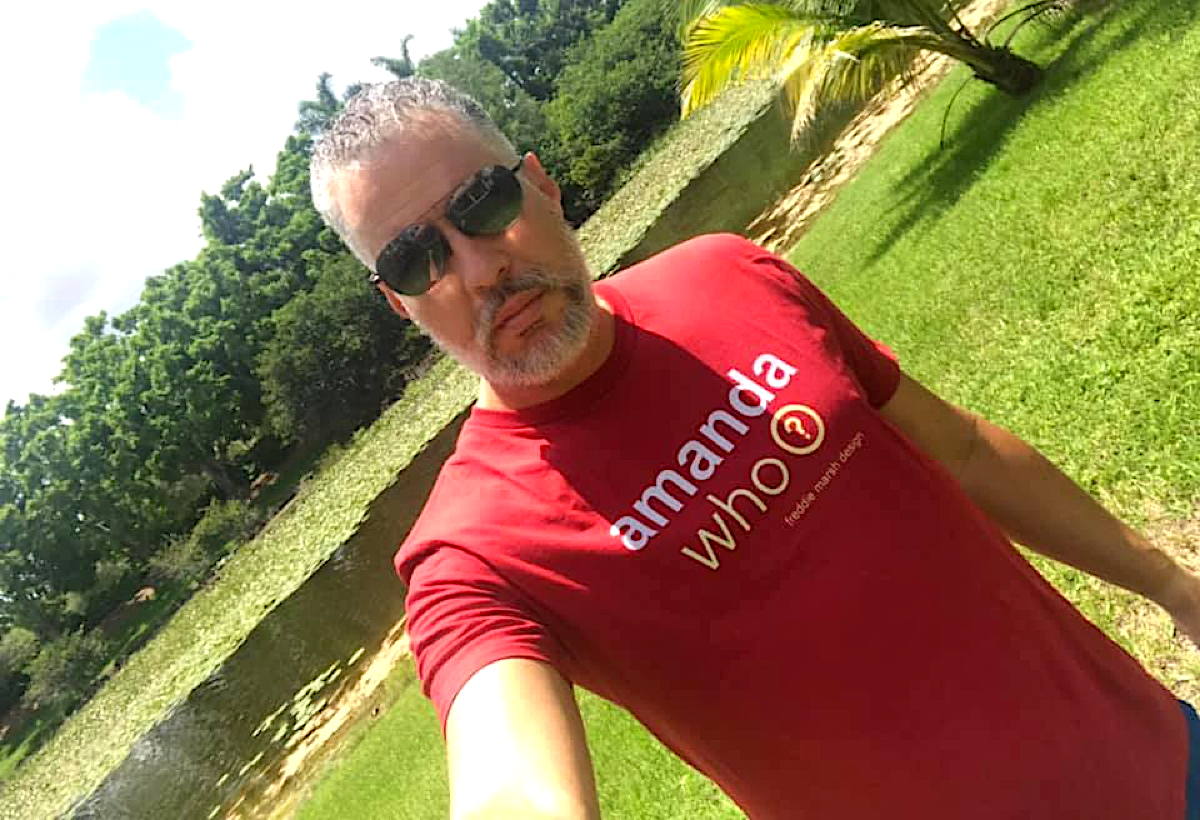 The tees have wound up in the most random of places, from Iron Maiden concerts to Pride parades to Buckingham Palace to even on the backs of celebrities.

Now, the two BDMs can’t keep up with demand from industry insiders wanting to get their paws on a shirt. That, and the influx of new Facebook friend requests  Marsh and Morris have received since the campaign took off.

“We hoped it would go big,” Marsh says. “We weren’t sure if we would look foolish, but we took a chance and we’re pleasantly surprised people are embracing it and having fun with it.”

The two also don’t mind seeing their faces and names plastered across people’s social media accounts. After all, visibility was the goal. 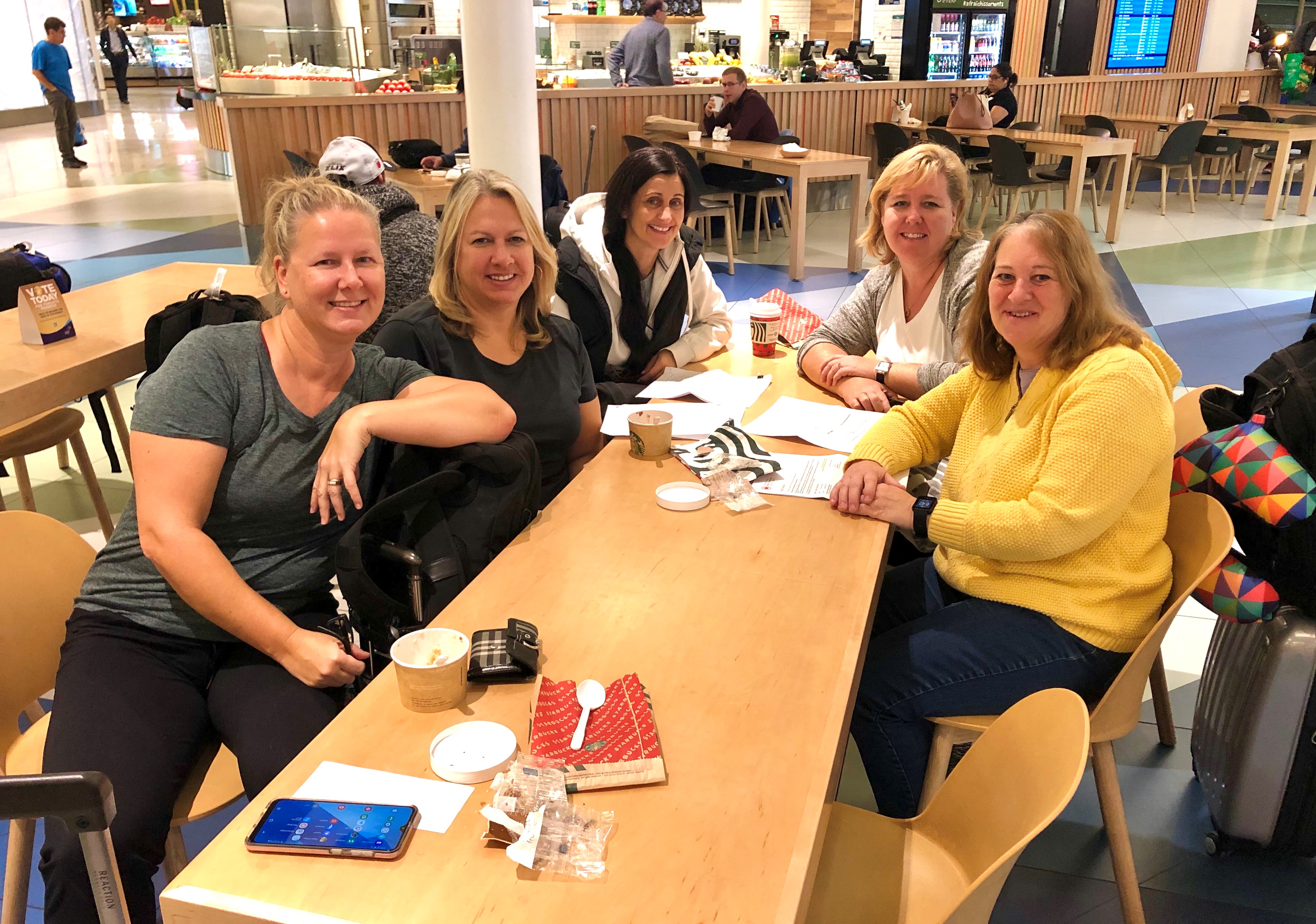 “People are seeing it and want to be involved in the fun,” Morris tells PAX. “It’s a pretty chaotic industry we’re in with so much going on. This is an opportunity to have a lot of fun and distract people from the seriousness of the industry.”

The new connections they’ve made as a result of the campaign are important, especially as business picks up, Marsh adds. 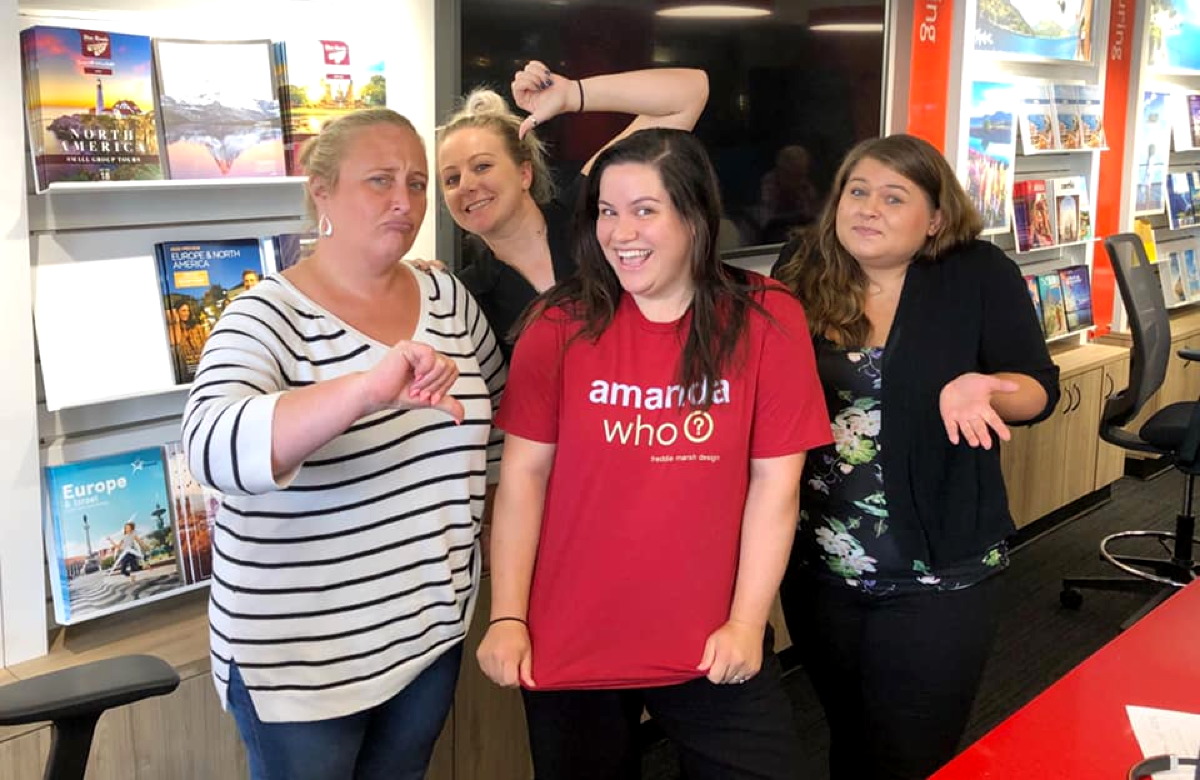 Playa is also offering double AgentCASH+ points for its DR resorts for new bookings made from now to December 15th, 2019, for travel through until the end of 2020.

“With all the new friend requests we’re getting, it shows how important social media is for us. Especially with home-based agents,” says Marsh.

The boss is staying out of it

“I feel like these are my children and they’re fighting with each other,” Rose Cosentino, Vice President, Sales for Canada at Playa Hotels and Resorts, (Freddie and Amanda’s boss), tells PAX. 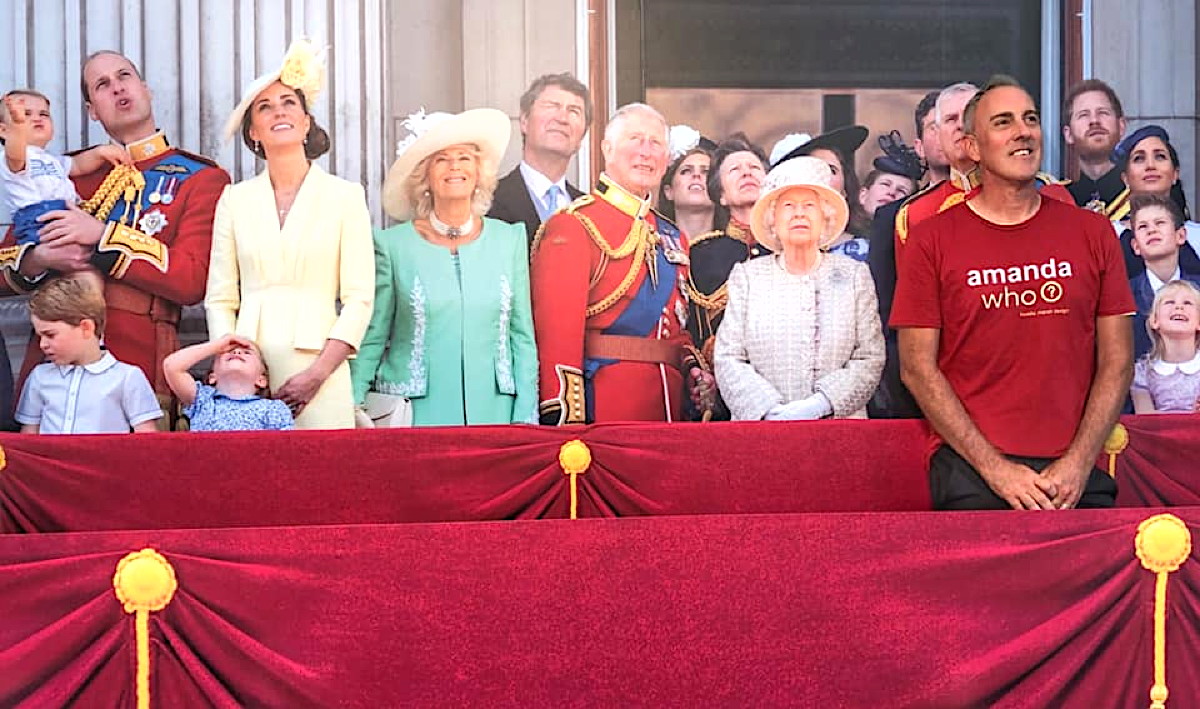 Cosentino, the designated “Mama Bear” of the team, confirms that she has indeed received a t-shirt from both Marsh and Morris, but refuses to wear one, or even show one on social media, to avoid favouritism.

Still, she’s all for stirring the pot. “I have to appear to be neutral, wink wink,” Cosentino tells PAX, cheekily.  “We all know we have a favourite.”

All banter aside, Cosentino applauds the “tongue-in-cheek” way her team has managed to stay relevant throughout the summer season.

And though the online exchange between Marsh and Morris can appear heated at times, Cosentino insists it’s all in good fun. 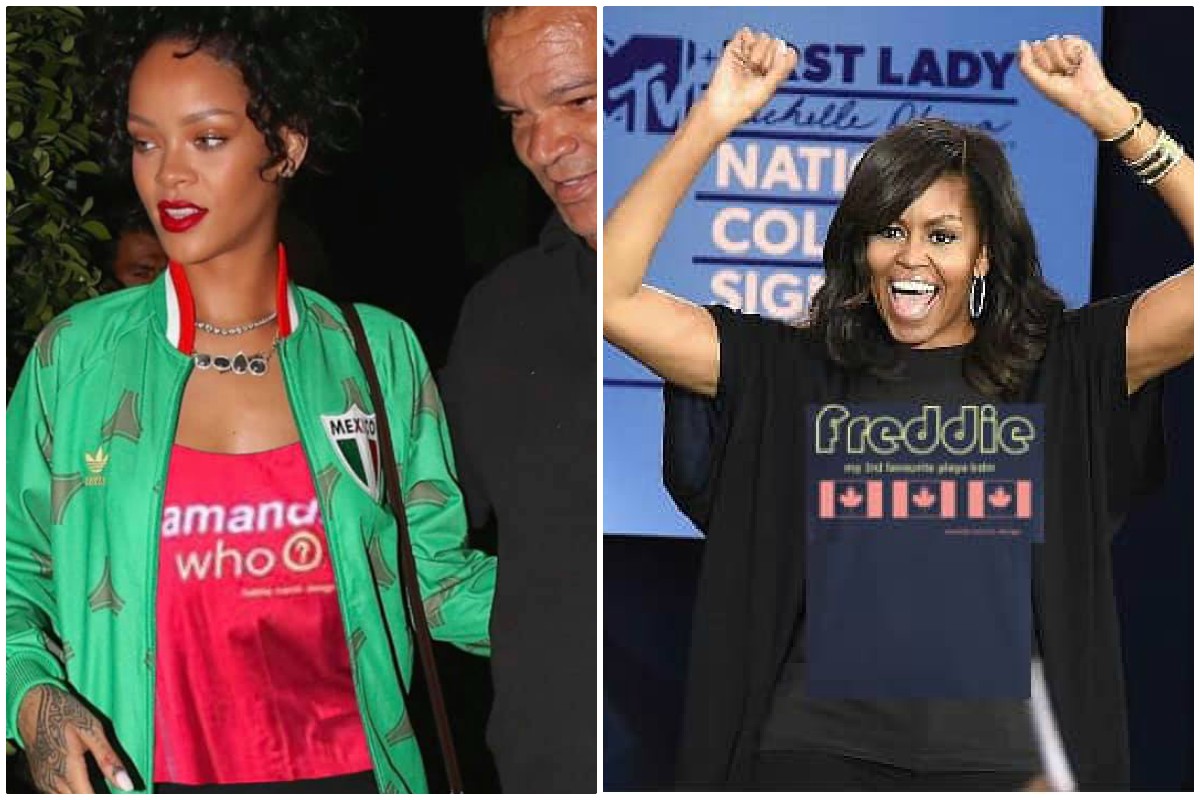 “My guys are awesome. I brag about them all the time,” Cosentino tells PAX. “They truly do care about each other. They talk to each other multiple times a day. It’s hysterical.”

A key observation about two BDMs who, in fact, live and work on opposite ends of the country.

“They both thrive on idea sharing,” Cosentino says. “I don’t think either one of them feels like they’re operating in isolation, which makes me happy.” 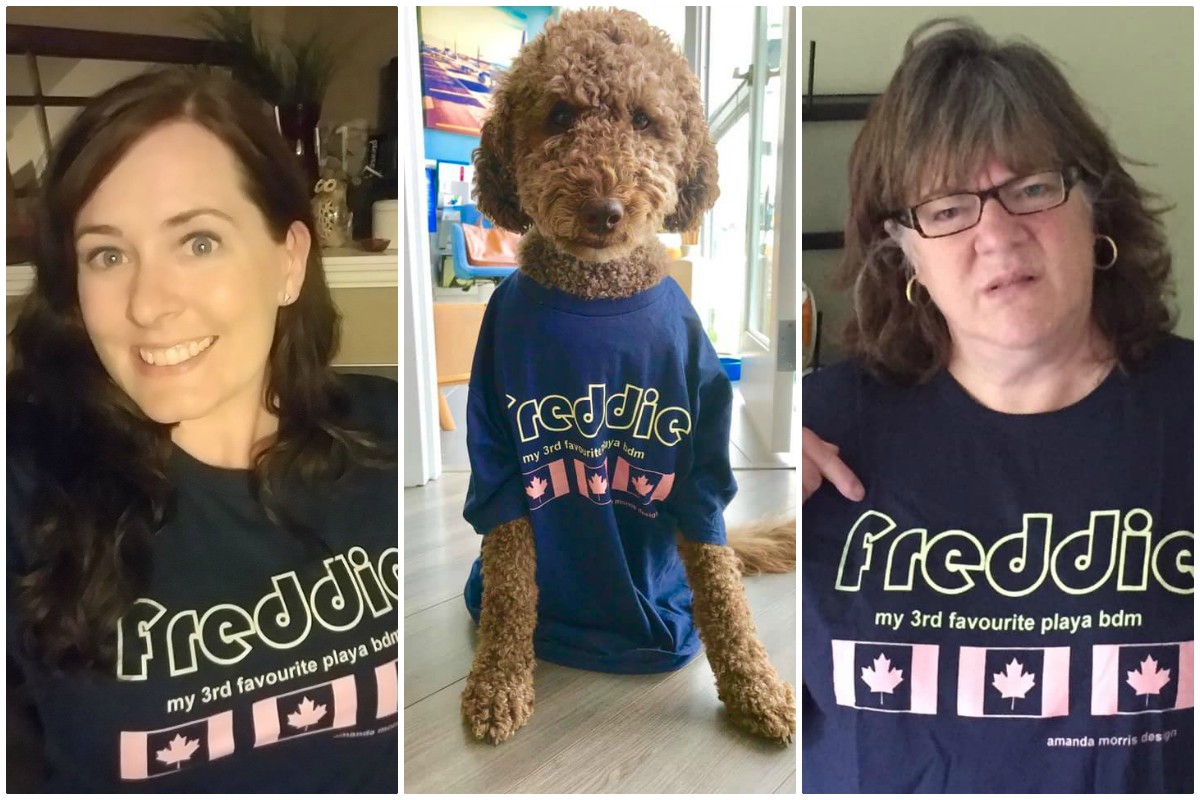 Cosentino says Marsh and Morris’ campaign is a prime example of how Playa Hotels and Resorts is always “pushing the envelope.”

“That is, culturally, what we’re about,” she says. “We don’t just do things because it’s the same old same old. That transcends through the entire organization.” 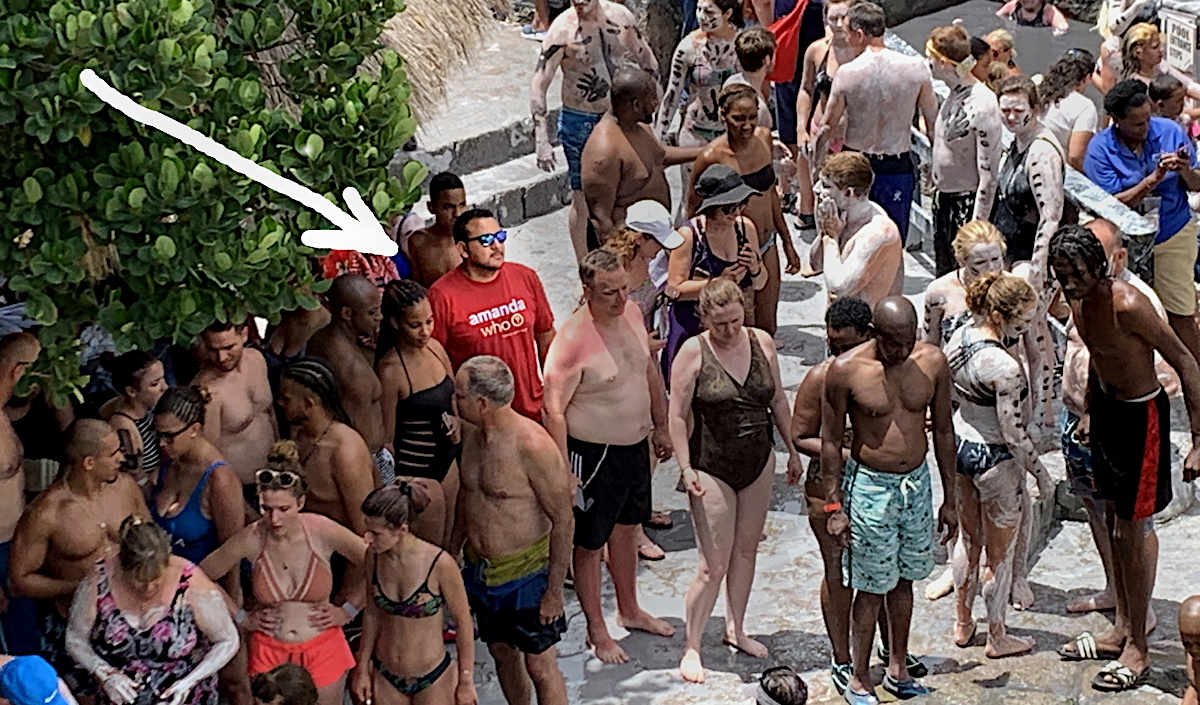 While Marsh and Morris have been making a lot of noise on social media, one wonders what Christian Roussin, Playa Hotels & Resorts’ business development manager for Quebec and Atlantic Canada, thinks of the ruckus.

Roussin, who joined the team in late 2018, has remained suspiciously quiet throughout the Marsh versus Morris ordeal, which begs the question if Roussin has been plotting a t-shirt attack of his own.

Well, he was. Literally minutes before publishing this story, PAX received a tip-off that Roussin had entered the ring with a shirt of his own.

“amanda and freddie are right! Christian is the best Playa Resorts bdm,” the new shirt reads. 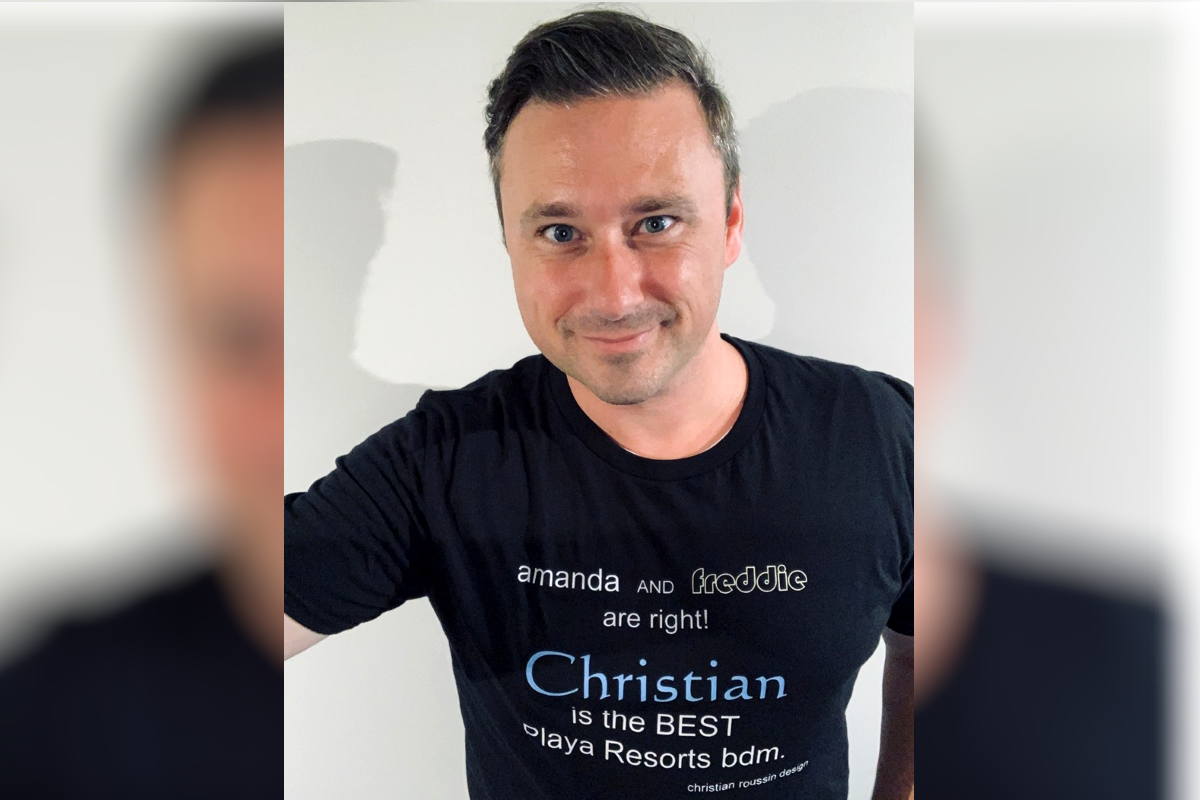 The sneak attack appeared to take the others by surprise.

“I didn’t see this coming,” Marsh wrote on his Facebook page Monday afternoon, posting a picture of the newly-released tee.

As for how long this battle between Playa’s Canadian BDMs will go on for, Morris says that “only time will tell.”

Then again, maybe it’s Marsh who’s having the last laugh – he claims his original “amanda who?” shirt wasn’t even about Amanda Morris in the first place.